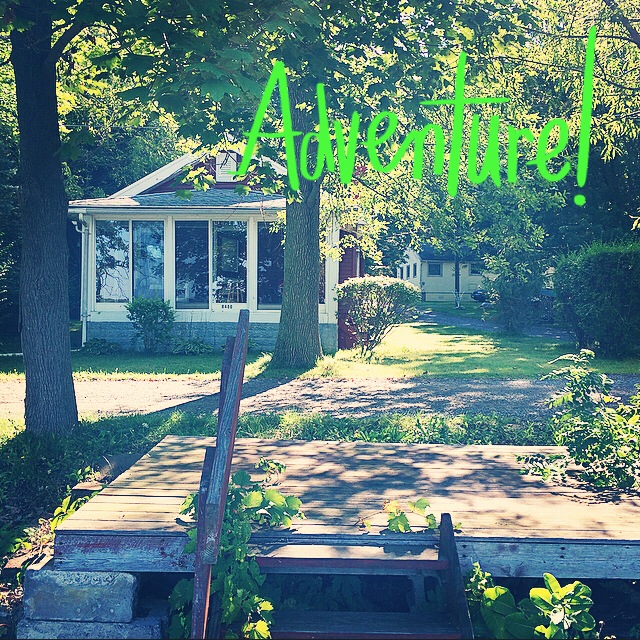 Hello friends.  As most of you know from past posts we’ve been feverishly trying to get our Itsy-Bitsy cottage renovated for summer. When we purchased this fixer-upper Labor Day of 2014 we knew that the renovations needed to make this place our own could not be done by the end of the year.  The previous owner had not done anything to the cottage since 1993 and boy did it show.  But we were patient and could see the potential this little gem had. We love the open floor plan and the fact that it was not just lake access or lake view it was LAKEFRONT! 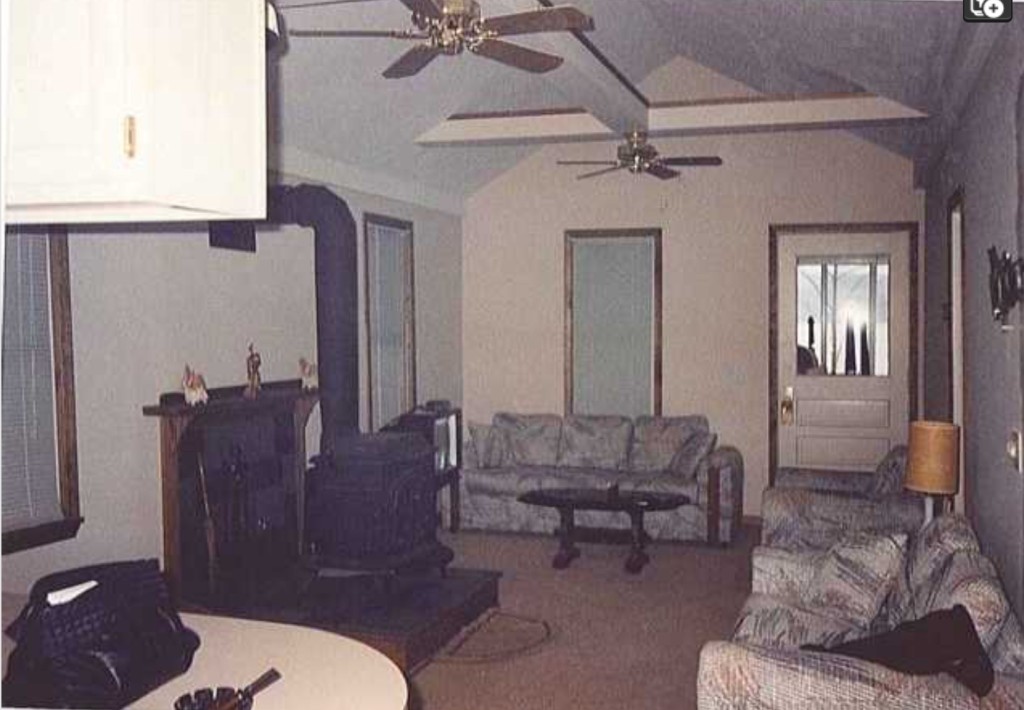 In its previous life there was once a fireplace but then replaced with a large cast-iron pot belly stove that sat in the middle of the living room.  Along with its positioning and the chimney not being to code we knew that we would be replacing it. In addition to all that,  the left wall was leaning out due to improperly placed support beams 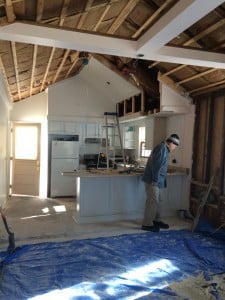 Down comes the soffit and cabinets over the kitchen peninsula. Improperly placed beams still in place. removal of the leaning wall and fireplace. 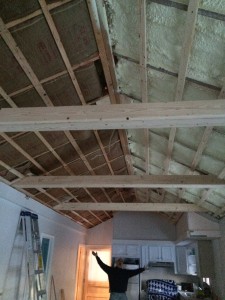 new I beams in! Spray foam insulation goes in the ceiling and new right wall.

During the winter months, we had the structural issue solved by replacing the old beams with new I-beams placed lower. We covered up the popcorn ceiling with T1-11 exterior siding. ( my new BFF)  A much more cost effective solution to traditional tongue and groove. We removed the soffit and the cabinets over the kitchen peninsula and immediately the kitchen was opened up! I will touch on the kitchen in a later post 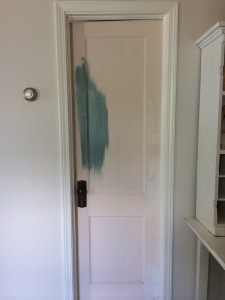 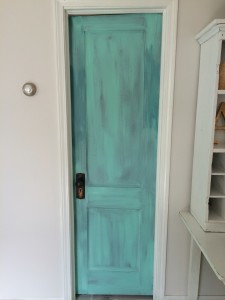 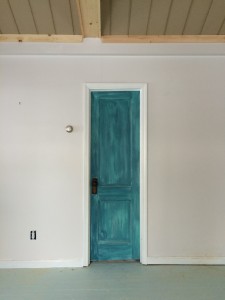 Every single wall, door, trim and ceiling was painted a light fleshy pink color and all the trim was stained dark. She had burgundy shag carpeting and green velvet furniture.  I absolutely loved all the custom sized doors which not one of them were plum or square! We painted each of the doors using leftover paint from other paint projects all different shades of blues and greens making sure that each coat was not done perfectly. I used an old poor quality brush that gave me a uneven brushstroke.  To me that was the ideal way to create a door that looked like it had been painted several years ago with multiple coats of paint. I finished each door a coat of Modern Masters tinted turquoise green glaze. Our first hint of the colors to come. 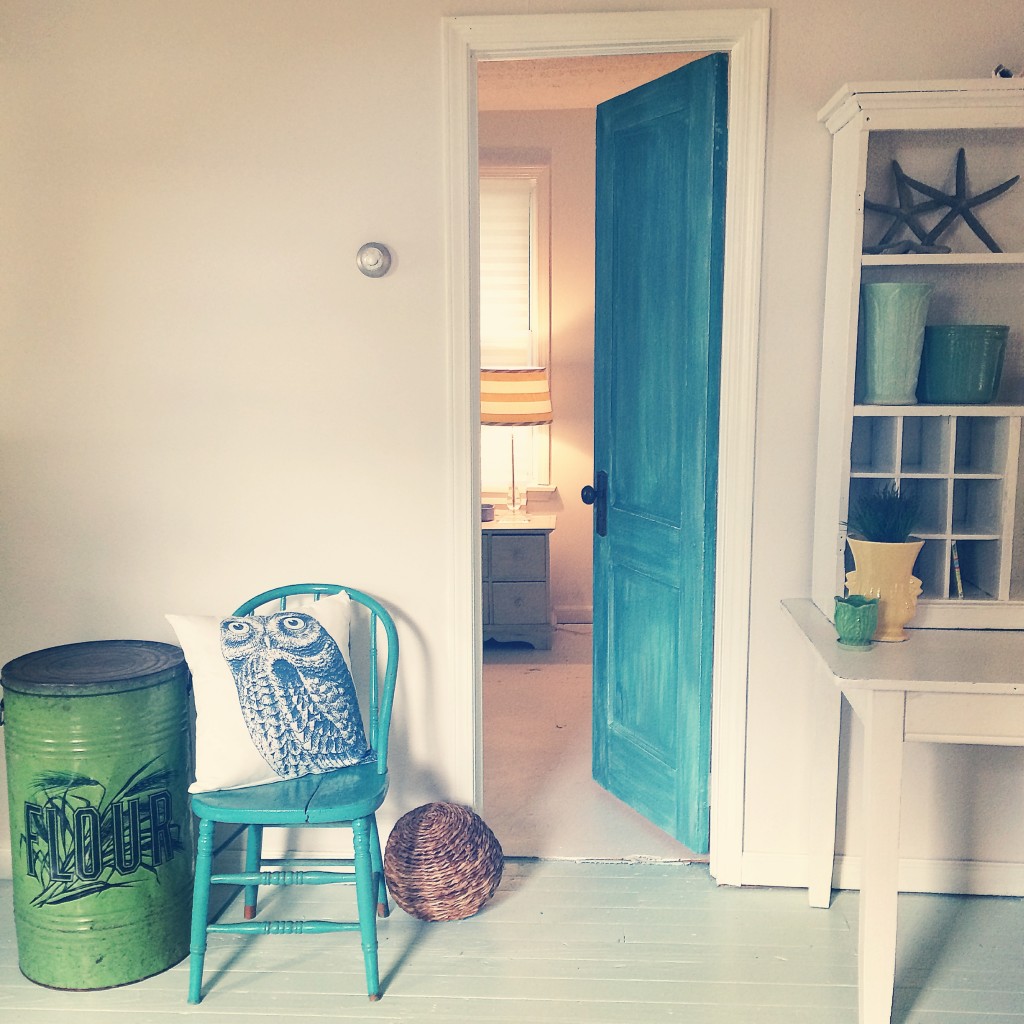 This is how it looked shortly after we removed the carpeting in all rooms. I could not remove the particle board sub floor in the bedrooms so I painted them white in the meantime.

On the day of closing, the first thing we did was remove the carpet and pad and found terribly damaged hardwood floors. I had always pinned these beautiful painted floors on Pinterest and decided to paint them a sky blue color.  Unfortunately, the kitchen had been renovated on top of plywood and a laminate floor thus removing the subfloor was out of the question. That left us with a 1 1/2 inch height variation from the kitchen into the living room. We knew that that flooring difference would increase once we added flooring to the kitchen. So after consideration in the spring we decided to go over the hardwood floors with another subfloor and a vinyl gray wash plank flooring making it all level. 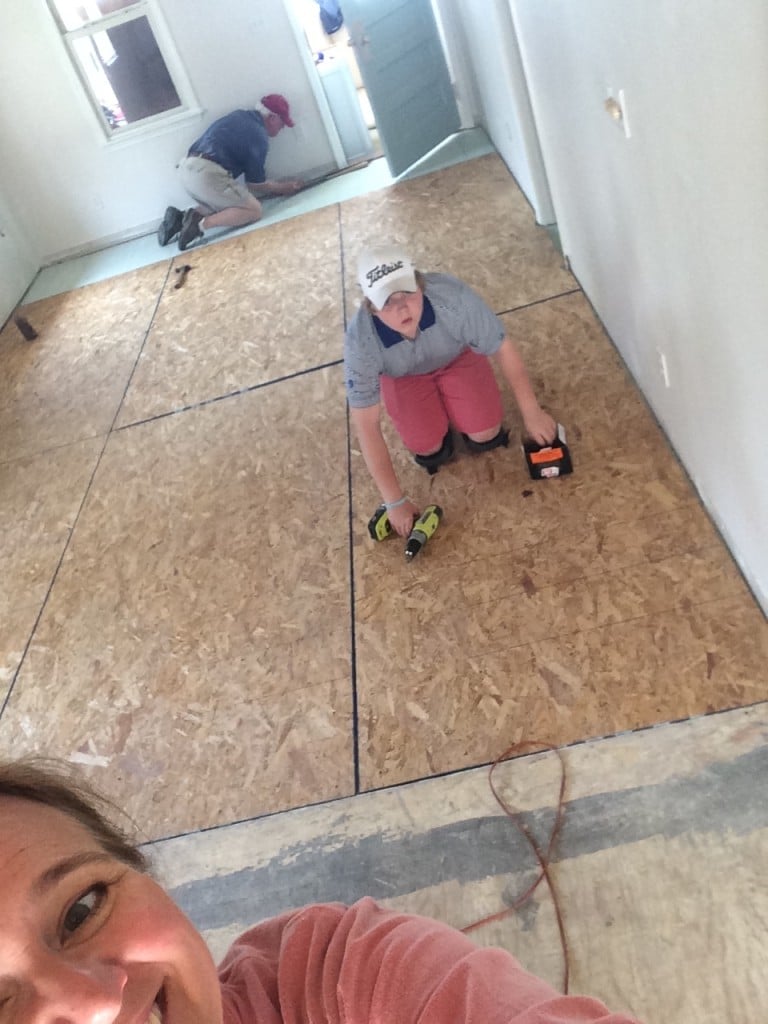 Its a family affair! Laying down the 4 by 8 foot sheets of sub floor in preparation for the vinyl planks. My nephew Ben put about 300 screws in the floor that day.

It was my first time putting in flooring.  after a simple YouTube tutorials we were on our way! The space was starting to take place. 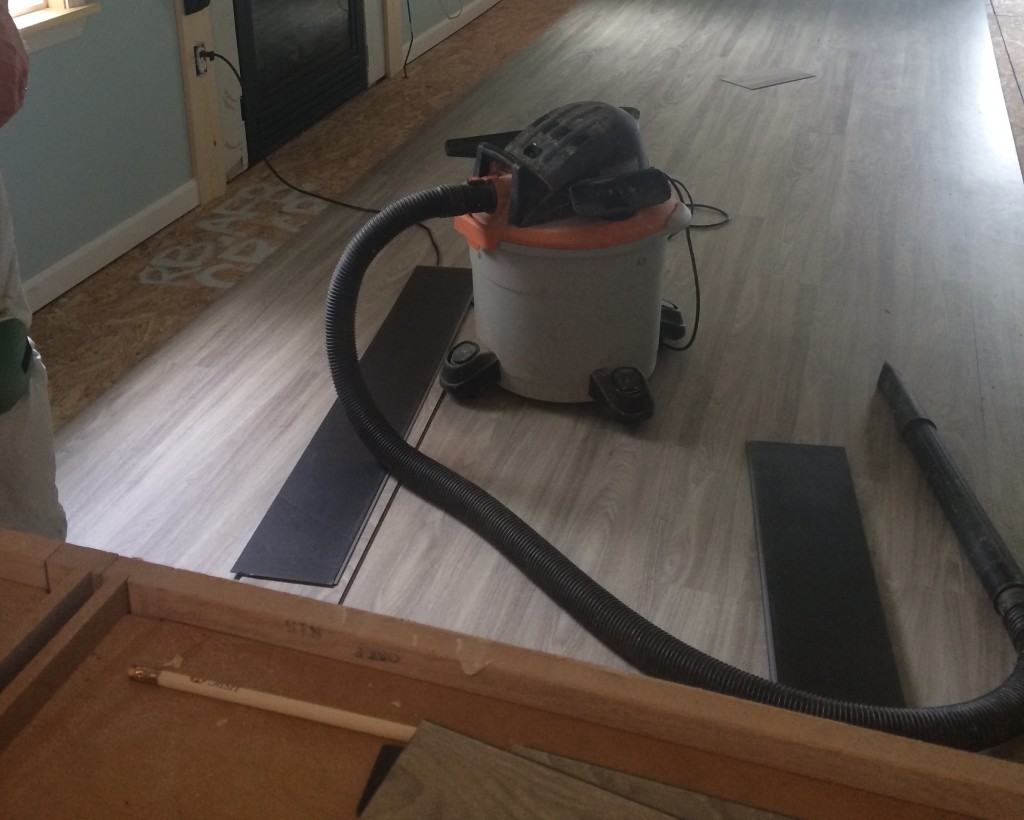 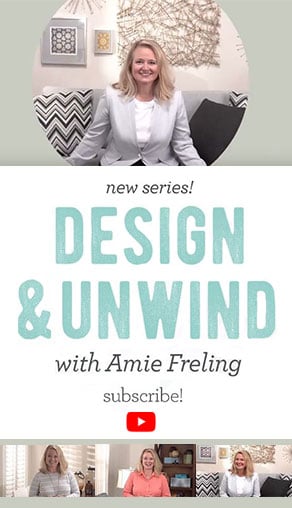 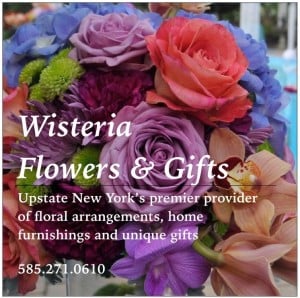